We DO wish to speak in support of our submission

In our submission we will support two key proposals in the ORC's draft plan. We will then repeat our request made in a similar submission to the Dunedin City Council's 10 year Plan 2018 for the two councils to work together on a major overhaul of public transport governance. We will outline our vision for improvement to the Dunedin bus network over the next ten years. Finally we will append our submission to last year's ORC Annual Plan which may have contained elements that were more appropriate to the Long term Plan process and which we still fully support.

PART 1: Items in the Draft plan

We support the ORC's plan to improve off-peak services to on-peak levels.

The successful implementation of the "Orbus Queenstown" of joint regional/district council management of bus services demonstrates that a similar move for Dunedin is timely. Both councils have been talking about this for years. Now it is time to get on with it:

Bus Users Support Group Otepoti-Dunedin asks the Otago Regional Council to negotiate and develop a model of shared management and funding of the Dunedin bus network with the Dunedin City Council for consultation and implementation as part of both councils' 2019 Annual Plan process.

We envisage the shared model as including:

Further, we note that there is a suggestion for governance to be handed fully to the DCC, which we would also support.

PART 3: Improvement to the Dunedin bus network over the next ten years

This new bus route is showing its potential, but not meeting it. The frequency is just too low, being mainly hourly. It therefore creates few extra journey opportunities at points around the "Ring" zone where it intersects with the long-existing radial bus routes. The ends of the Ridge Runner, at the Stadium and Andersons Bay Rd are not destinations in their own right, and more potential is lost by not having the route continue past these points.

Bus Users Support Group Otepoti-Dunedin requests that the Ridge Runner service be increased to run quarter-hourly throughout the day, and complete a full circle by linking both ends via the waterfront. We believe this route will become one of the most popular routes, and remain so at all hours of the day. By running via the developing waterfront it will introduce bus travel to a large employment district and aid the economic revitalisation of this area. The "Orbiter" in Christchurch is a successful example of such a route.

There have been repeated calls for better connections for southern routes to South Dunedin, and these have not been answered to the community's satisfaction. We see opportunity in linking the many routes that terminate in this area, just short of one another:

The Green Island hill should become a place where journeys are made, not blocked. We understand the regional council felt unable to justify a full extension of Route 70 to Dunedin as a "local" all-stops service parallel to the 77 express route. By linking up some of the above routes, many more journey possibilities could be opened up. A location needs to be found for a "super hub" linking all routes in the area. Maybe Lookout Point, with additional stops on the highway added for Route 77, maybe the existing Green Island hub. This "Southern gateway", wherever it was, would become a sort of Cargills Corner, with bus routes converging from all directions.

Very few suburbs are as poorly served as Dunedin's City Rise, an area of lower incomes with high density population and many older residents, students and families with young children. The area is dominated by rental residents, not homeowners. It is served by only one bus stop, which is unable to be used by wheelchair users and other mobility-impaired people. The regional council has ruled out reinstating the former bus route via Canongate, but community dissatisfaction remains, as does the exclusion from the bus service of many people with mobility impairment in this area.

In Bus Users Support Group Otepoti-Dunedin's submission to the 2014 Regional Public Transport Plan we provided a route concept that would allay many of the above concerns, yet be cheaper to run than the present route due to slightly lower mileage. It would allow connection to shopping and medical services in Mornington and also provide better journey opportunities by providing a connection to other routes near Mornington.

To quote: We oppose the removal of service from the Arthur St area. We think a one way loop including this area is a fair, accessible and affordable design for a Belleknowes service in keeping with the "main roads" policy. 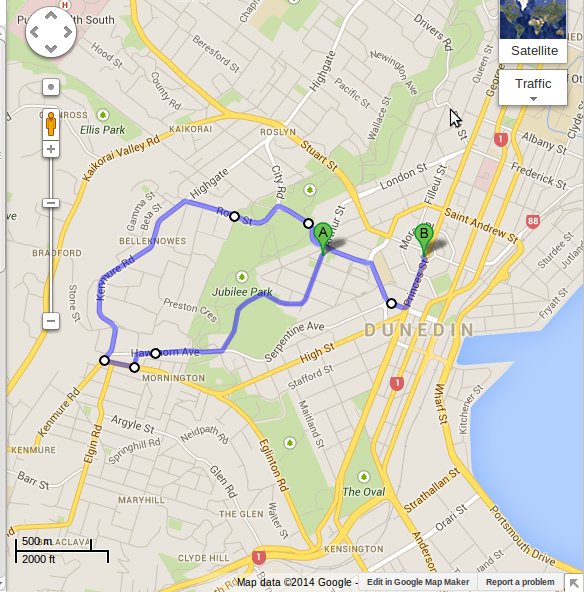 We note the Mosgiel service is regularly overloaded at peak times, with instances of people having to catch earlier buses to avoid a half-hour standing journey. We believe the proposed Airport bus service would go a long way to assisting with this problem, as long as Airport buses have a stop near the entrance to Mosgiel as part of their journey (we also hope they would include stops in Momona village, Allanton and East Taieri). Our suggestions for a "Southern Gateway" of improved links in the Green Island area would also help by dispersing the peak load of Mosgiel traffic over more routes.

Bus Users Support Group Otepoti-Dunedin requests that the Airport bus be integrated in to the Mosgiel bus service, aimed at providing journeys over many Taieri communities including an extra-fast Mosgiel to Dunedin link"

The Mosgiel Loop service travels every 40 minutes while the Route 77 express to Dunedin goes every 30, so the services only meet up once in a blue moon. Also the Mosgiel Loop does not serve many newly expanding parts of Mosgiel and does not connect with long distance buses at the entrance to Mosgiel, where a possible Airport bus might also stop.

We note the following policy in the 2014 Regional Public Transport Plan 5. ORC will progressively withdraw from providing contracted school bus services. The new Dunedin bus network and ticketing system enables school pupils to access their school of choice without the need for separate school bus services provided by ORC. This means:

(b) some pupils may have a short walk from the bus stop to their school, and vice versa

In our submission to the 2014 RPTP, Bus Users Support Group Otepoti-Dunedin did not oppose this policy. Since that time, several ORC school bus services have ceased, to brief mild protest but many pupils were able to adapt to the travel on the public bus network. When a large Dunedin bus company decided to end its commercial school runs, there was much more anguish. One particular run, Portobello to Tahuna Intermediate, regularly ran with a full load. We note the request by parents of this school for the ORC to become involved in school transport. We also note the concern of the ORC that many other schools might make similar requests.

This provides a logical justification for a relaxation of the ORC's Policy 5 (2014 RPTP).

We commend the school bus service provided by Gisborne District Council to the ORC's consideration.

Bus Users Support Group Otepoti-Dunedin requests that the 2017-2018 Annual Plan include the following:

A programme to upgrade bus stops in Dunedin (and Palmerston) bus network to a standard equalling or exceeding that in the NZTA Guidelines for Public Transport Infrastructure and Facilities and the World Heath Organisation's WHO Healthy Cities programme, in consultation with bus users. We suggest that improvements be made when normal road maintenance or construction is carried out so that there need not be any extra construction cost. For example, when road markings are reinstated following resealing, the yellow "bus stop" markings could be reinstated in accordance with the 'Guidelines' document. We envisage all this work would be performed by Dunedin City Council at the ORC's instruction (this list was also included in our DCC Annual Plan submission).

We would like the Otago Regional council to fund, and to instruct the Dunedin City Council to install, additional bus stops at the following places (this list was also included in our DCC Annual Plan submission):

In most cases these proposed stops are not "improvements" as such but bring routes up to standard to comply with the ORC Regional Public Transport Plan 2014 Policy 18 "(a) In built-up urban areas, spacing between bus stops of 300 and 400m are desirable in most situations, certainly no more than 500m apart and no less than 200m apart."

We request the following stops to maintain bus service accessibility in the Octagon area when the Bus Hub is built (these were requested in our submission to the Bus Hub consultation):

Retrieved from "https://busgodunedin.fandom.com/wiki/Submission_to_the_Otago_Regional_Council%27s_2018_Long_Term_Plan?oldid=4412"
Community content is available under CC-BY-SA unless otherwise noted.